This is another picture  of roadside  trees made recently whilst  an early morning poodlewalks  with Kayla along Baum Rd, in Waitpinga. Whilst walking that morning I spotted rabbits darting across the road,  a fox moving quickly across the field, and a couple of  kangaroos in the distance. 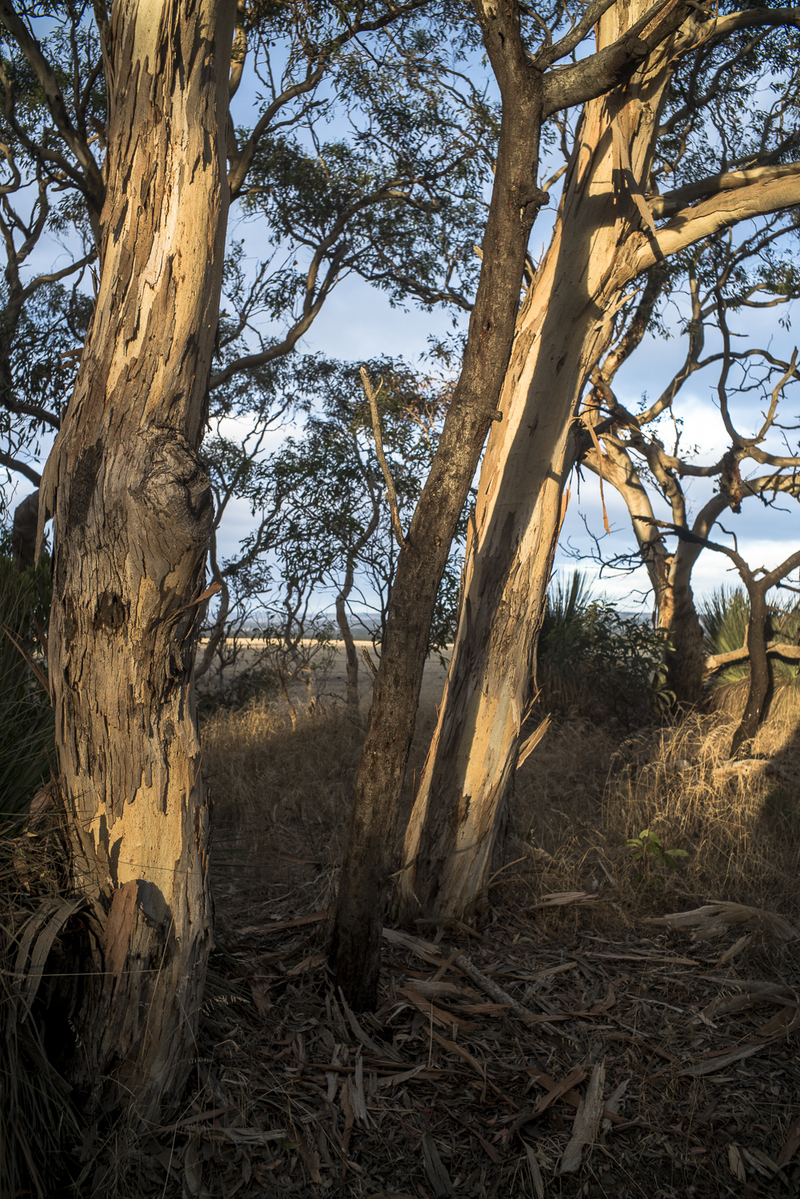 We woke to the smell of  the fires that morning, the 11th January 2020.    The  blueish smoke haze from the bush fires  hung   along the southern coast of the Fleurieu Peninsula. It was the morning of the day  that saw some light  rain that was part of a south westerly change.

This picture was made in late November 2019 whilst I was on  an early morning poodlewalk with Kayla: 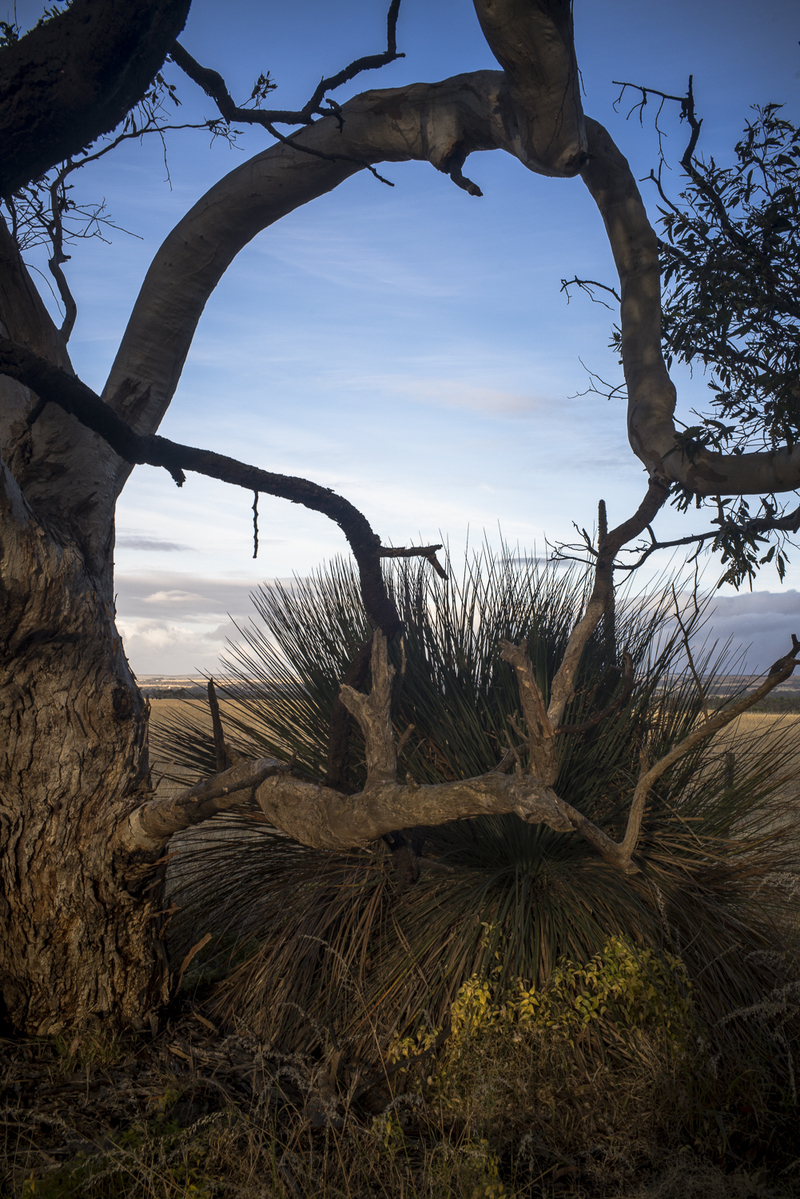 I made a number of photos along Baum Rd in Waitpinga around this time, prior going into hospital with an infected leg. The wild, windy  spring  weather had eased, the mornings were mild,  and the early morning light was soft. I was attracted by the darkness as opposed to  the brightness of the early morning  light  when I am walking along along the foreshore of Encounter Bay.

This picture was made in mid-October whilst I was  on an early morning poodlewalk.

I was  with Kayla and we had been walking along Baum Rd in Waitpinga since sunrise.  Kayla was on high alert for hares and kangaroos. A fox in the distance  quickly disappeared. We were returning along Baum Rd to the Forester when the photo was made. 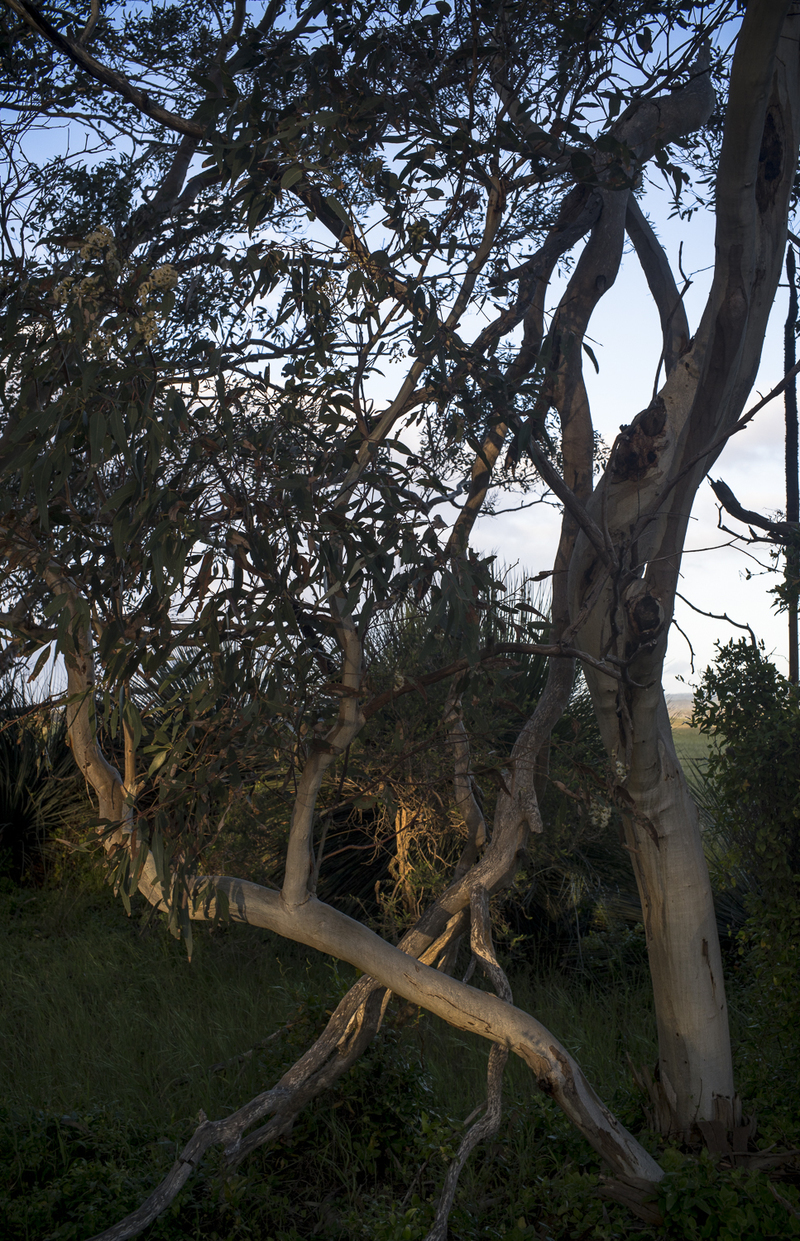 In the  few weeks since this photo  the green  undergrowth has turned  yellow/brown.  It is the same with  the fields in the background.  The landscape has  been transformed. It is now a yellow/brown landscape. This is the summer look,  and it lasts until the rains in late autumn.

It has been extremely windy along the southern coast of the Fleurieu Peninsula during  this last week or so. Gusty westerly winds  over 50km/h with rain. This picture of roadside vegetation  was made on a  quiet morning on a day in early November when the rest of  my  day was being  spend in front of a computer  trying to finish the essay on aesthetics for the Adelaide Art Photographers 1970-2000 book.

The morning  was a moment of respite  between the days of wild, windy weather: 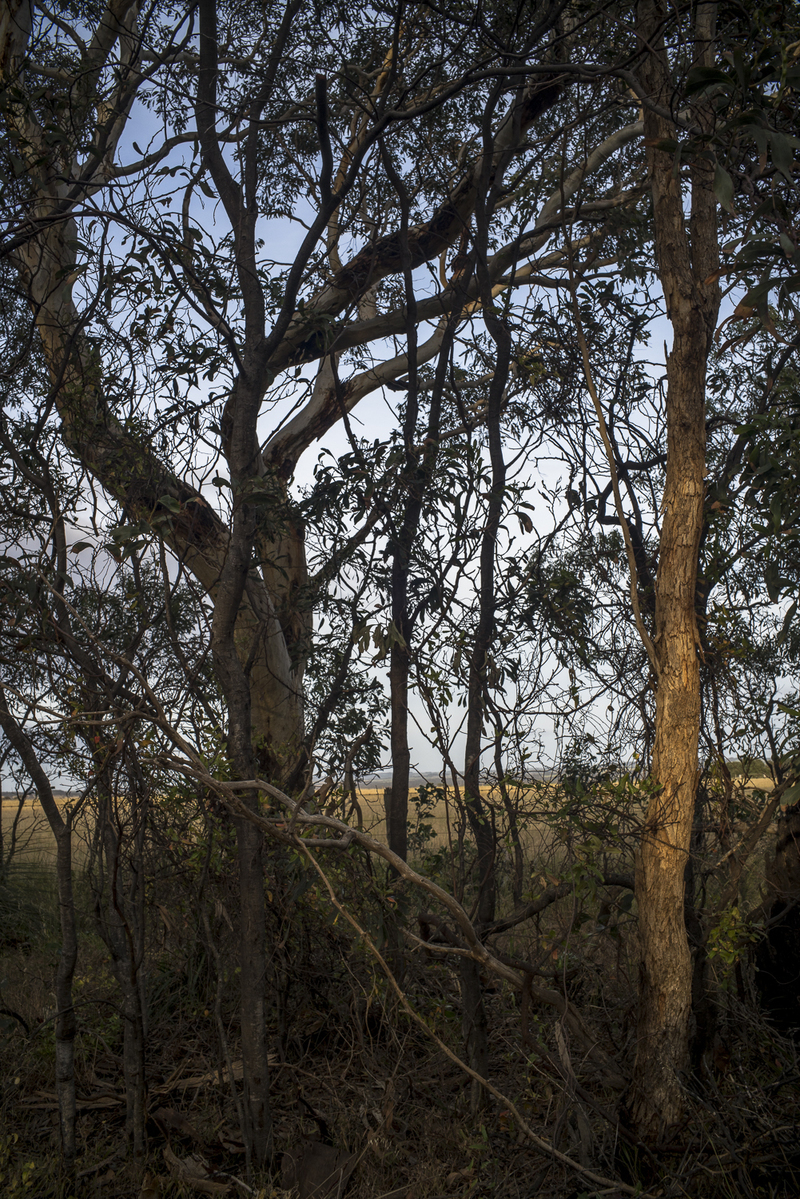 I was on an early morning poodlewalk with Kayla. As it is  spring  I only walk along the Heysen Trail   or  the back country roads in the early  morning.   The brown snakes are out and about in the late  afternoon.  They are very active at the moment  and they are quite hard to see amongst the grassy road side when  I walk along these back country roads   with the poodles.

This bark study was made in February 2019 whilst I was on a poodlewalk with Kayla  along the Heysen Trail in Waitpinga: 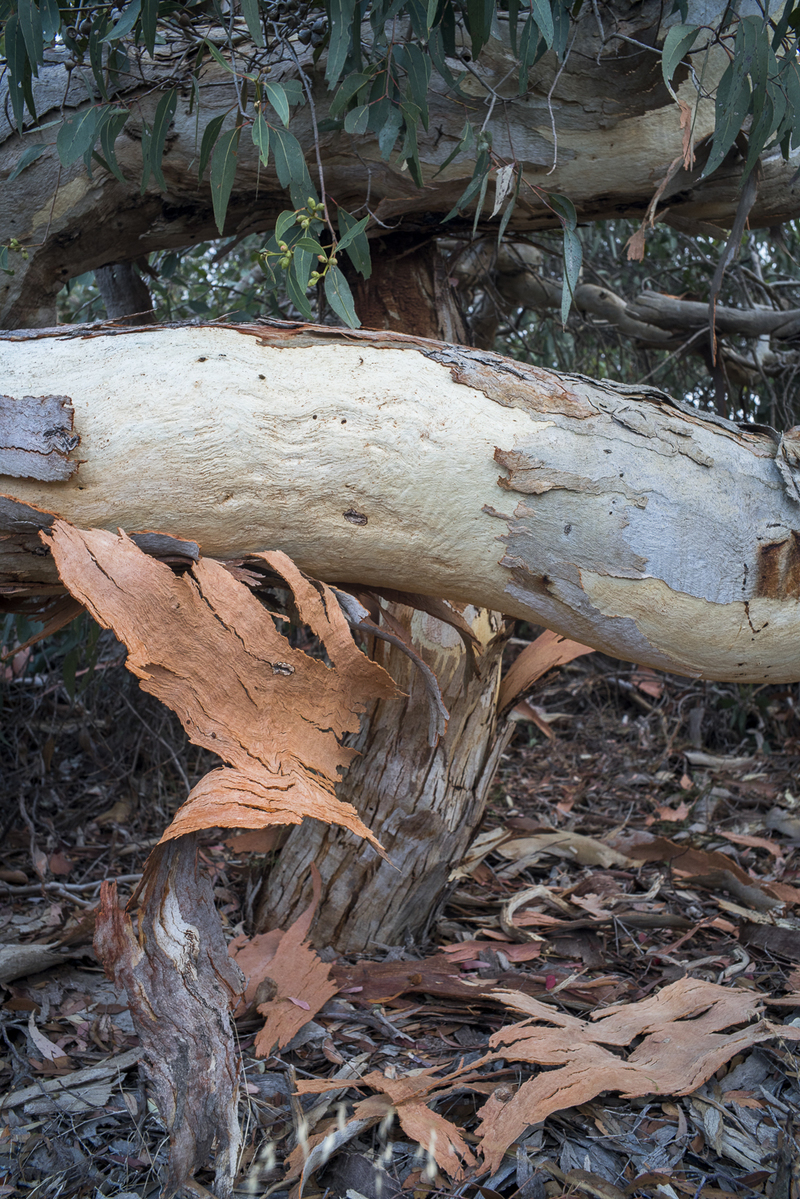 I went back a couple of days latter  with a  film camera and tripod to re-photograph the bark.    Sadly,  a couple of days of  strong  south westerly winds had torn the bark off from the trunk of the pink gum (Eucalyptus fasciculosa).

This picture of the trunk of a pink gum (Eucalyptus fasciculosa) was made whilst I was on an early morning poodlewalk with Kayla in early October this year. The picture was made  prior to the sun breaking through the cloud cover: 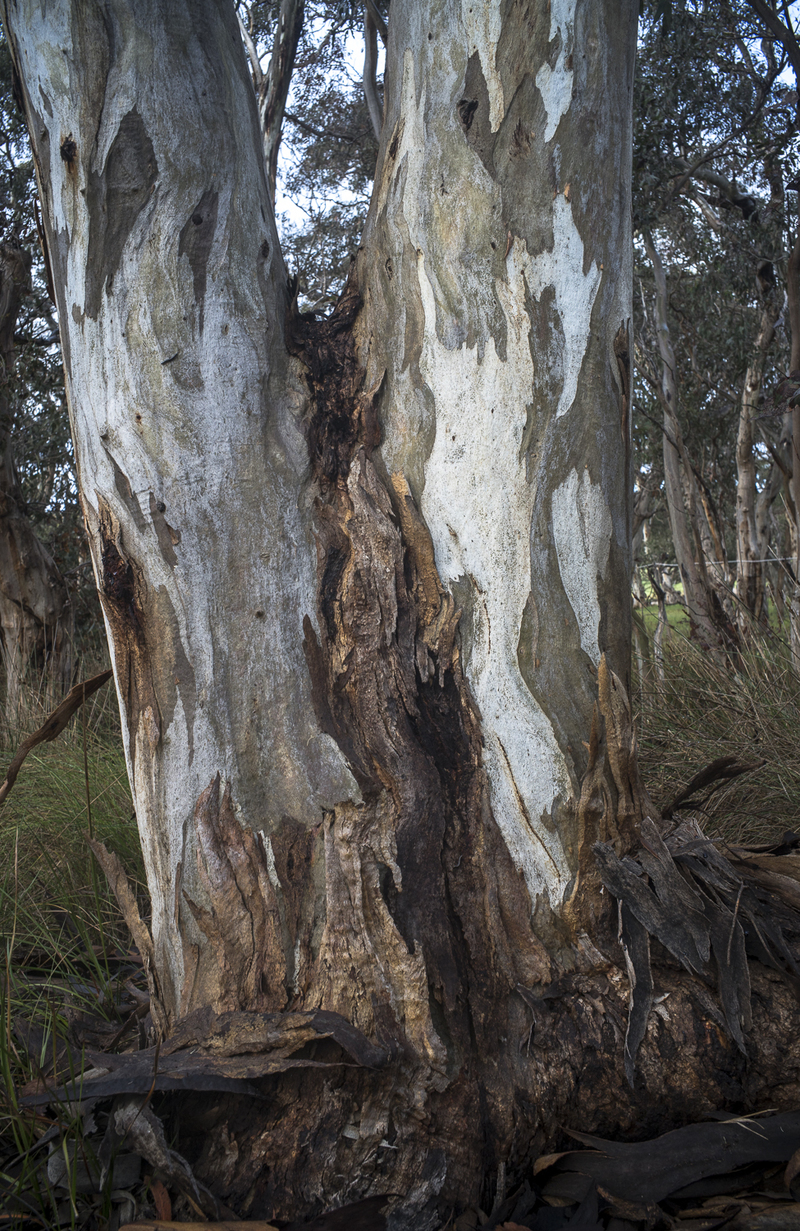 The pink gums are situated at the low point of Halls Creek Rd. This  creek only runs when there has been  a very wet winter. This did not happen in 2019.

I have tried several times to photograph the strand of  coastal melaleucas along the edge of  Esplanade Beach in Victor Harbor. This usually happens   when I am bored with walking along the beach whilst on the early morning  poodlewalks. 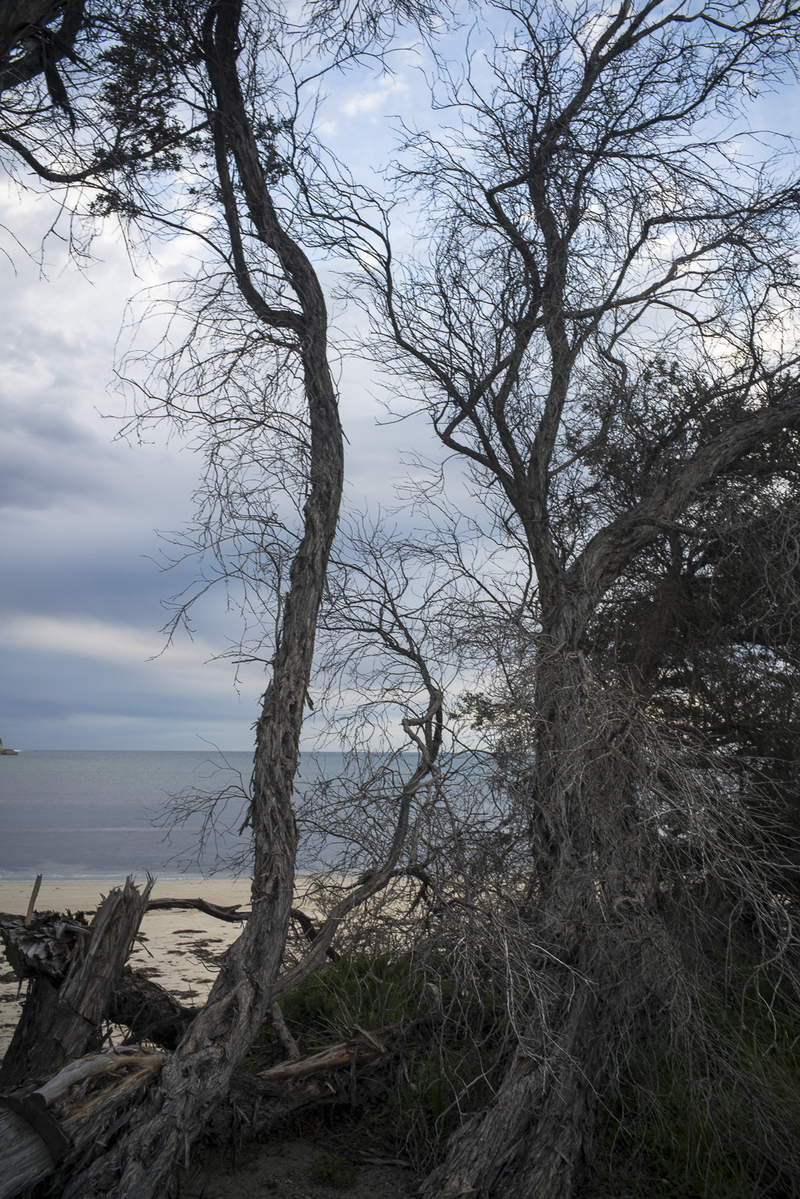 Unfortunately, I  have not been very successful. I did find a good location on an early  poodlewalk,  but I have never been able to relocate  it,   despite numerous attempts to do so since then.

The above picture  is a recent attempt.The tip of western side  of Granite Island appears on the left of the picture.

This particular pink gum on Jagger Rd is close to  the corner of Jagger and Baum Rds in Waitpinga. It is an area where we often go for our poodwalks. 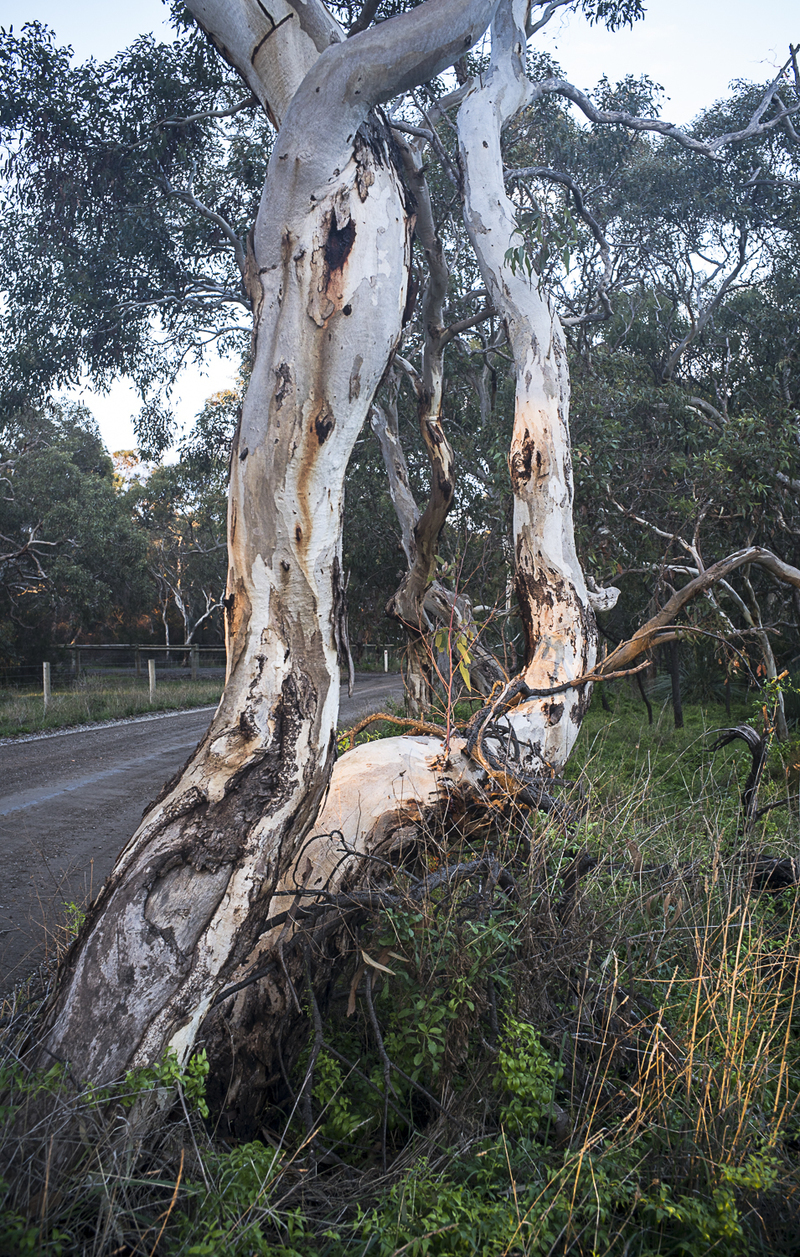 On this occasion we were returning  to the studio via a back country road in the Forester. We had  been at   a photo session on  agricultural landscapes    and as we came to the corner  I saw the last rays of afternoon light falling across the  trunk of pink gum. I stopped the car, picked up the  digital camera and made the photo.

This picture of roadside vegetation along Depledge Rd in Waitpinga on the southern Fleurieu Peninsula is from the archives--around  2011 and made in the late afternoon whilst on a poodlewalk.  Since then  I have continued walking the back country roads and photographing  the roadside vegetation. 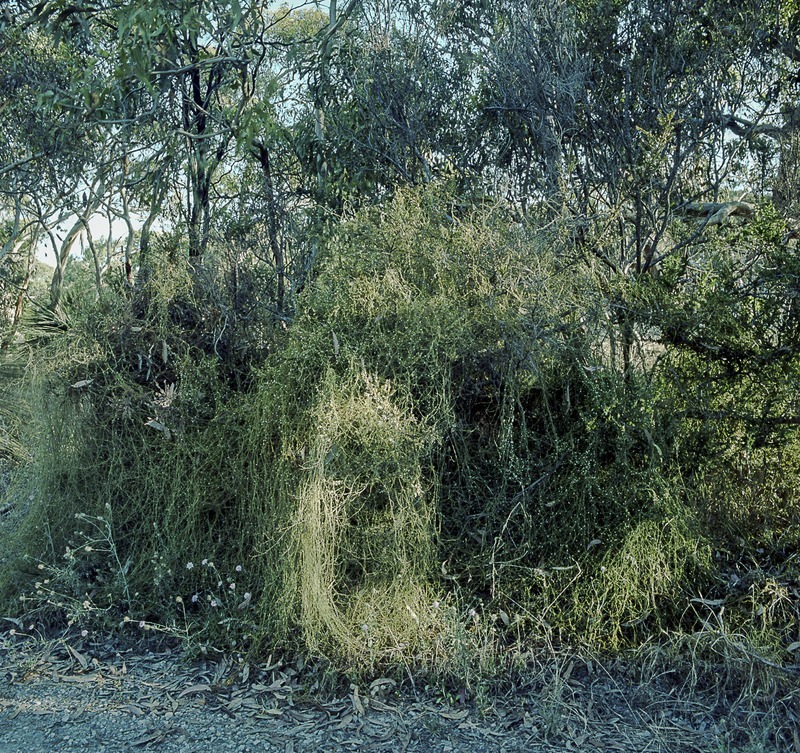 Whilst doing so I  become slowly aware that the roadside vegetation in this region is slowly becoming less healthy.  When trees die, are strangled by box mistletoe infestation, or fall over in a storm they  are quickly chopped down for firewood. There is very little natural re-growth taking place within  the roadside vegetation  between the agricultural paddocks.  The  thinning tree canopy is noticeable,  as is the overall poor condition of the pink gums in this rural part of  the Mt Lofty Ranges.

This picture of two eucalypts standing at the Tugwell Rd entrance to  Halls Creek Rd  in Waitpinga was made on an early morning winter.  I   was on a  poodlewalk  with Kayla: 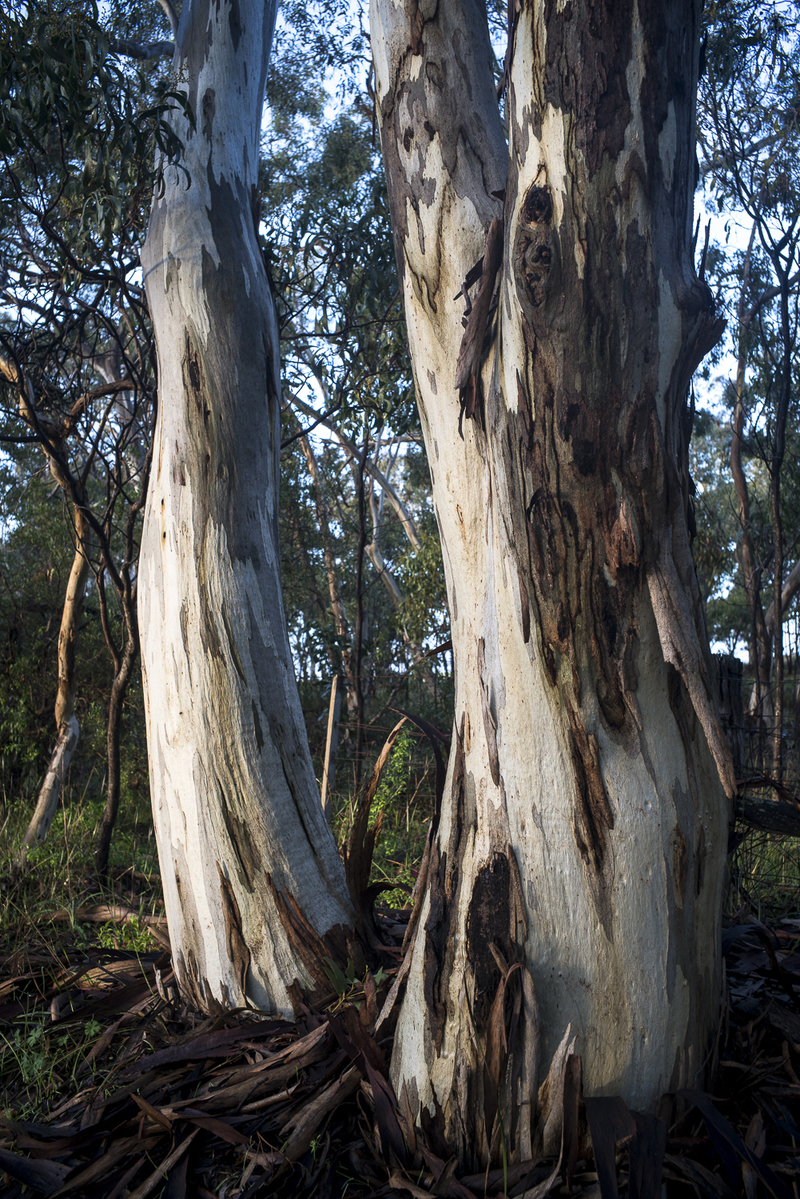 I also photographed these trees  with  a Rolleiflex SL66 in both colour and black and white.